There is a bug in BGinfo that some of you may have noticed which causes the applied wallpaper to be tiled even though bginfo is set to “stretch” mode. This occurs on windows 8/10 where you have the following setting set to more than 100% : 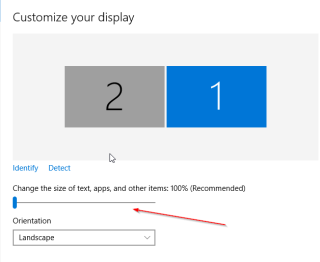 This problem would happen even if i had a wallpaper with dimensions the same as the screen resolution. This makes no difference because of the above slider setting:

Example of what it looks like when tiled (not my image)

No matter what i tried to do i could not get BGInfo to behave. I noted that this issue is a problem on machines with a higher horizontal resolution than “1680”. I put together the below powershell script to check this resolution, and if greater than 1680 , bypass bginfo and set a normal (corporate) wallpaper without BGinfo applied, otherwise BGinfo will run as normal.

This file runs as a user logon startup script.

Note: The only issue with this script is the user will have to log off/on to see the changes for the first time. I tried to use an old unsupported method (from WindowsXP) of ” rundll32.exe user32.dll, UpdatePerUserSystemParameters ” but this doesnt work, if anyone has any suggestions on what replaces this command let me know in comments.

hosted with ❤ by GitHub